Phoenix Seminary is pleased to announce the appointment of Dr. J. Michael Thigpen as the next Provost of Phoenix Seminary. Dr. Thigpen currently serves as Associate Professor of Old Testament at Talbot Seminary and has served as the Executive Director of the Evangelical Theological Society (ETS) for the past decade.

Ron Ogan, Chairman of the Board of Directors at Phoenix Seminary, states that Dr. Thigpen’s hire is “another step in the provision of esteemed scholars, published academics, and experienced church ministers to the faculty and leadership of our Seminary.” 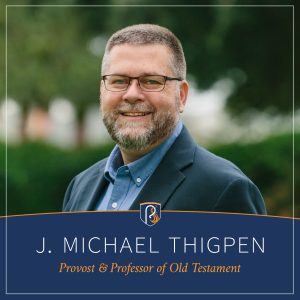 Dr. Thigpen’s stature as a leader in evangelicalism is well established. During his tenure at ETS, the organization has nearly doubled its membership and its reputation continues to grow. Dr. Wayne Grudem, Distinguished Research Professor at Phoenix Seminary, said that “the multiple friendships Dr. Thigpen has developed through his work with the Evangelical Theological Society will prove valuable in scheduling visiting lectureships and overseeing future faculty hires.”

In addition to his extensive administrative background, Dr. Thigpen also brings valuable pastoral and teaching experience to his new role, having served as a pastor, elder, and professor. Dr. Thigpen’s doctoral research focused on divine motivation in the Old Testament and was published as Divine Motive in the Hebrew Bible: A Comprehensive Survey and Analysis (Gorgias, 2015). He is also at work on several other books, including a commentary on Hosea, Joel, Amos, and Obadiah for Kregel’s Kerux series.

As Provost, Dr. Thigpen will oversee the faculty and staff, all academic programs, online education, and enrollment. Additionally, Dr. Thigpen will serve on the cabinet to help provide long-range strategic vision to the Seminary.

“As we prayed through this decision,” Dr. Thigpen said, “there were a number of items we kept coming back to that excited us about the opportunity. First is the location. Situated in our nation’s fifth largest city, Phoenix is poised to make a major impact in the Southwest, the nation, and the world. Second, the institution’s history and future are exciting. Building on a heritage of faithful obedience, the school continues to live out bold convictions that Jesus Christ is the only hope of salvation, and that the Scriptures are trustworthy and inerrant. Third, the excellence of the faculty. From world-renown theologian Wayne Grudem, to rising biblical scholars, the Phoenix faculty makes a difference in the local church and in the international academy. Finally, the president’s vision for the school is compelling. I look forward to partnering with Dr. Arnold to build on Phoenix Seminary’s strengths as we look to shepherd the school for the next generation.”

President Arnold says of this new hire, “I created a wish list for a Provost when I first came into office. I was looking for administrative abilities, pastoral experience, scholarly aptitude, and even a Provost with a background in Old Testament. Mike Thigpen checked every box. Most importantly, I have been impressed with his deep devotion to Christ and the church. Phoenix Seminary stands to profit immensely from his service.”

Dr. Thigpen earned a B.A. from the University of North Carolina at Chapel Hill,​ his M.Div. from Columbia Biblical Seminary, and his M.Phil. and Ph.D. from Hebrew Union College. He and his wife, Bonnie, have two grown daughters.